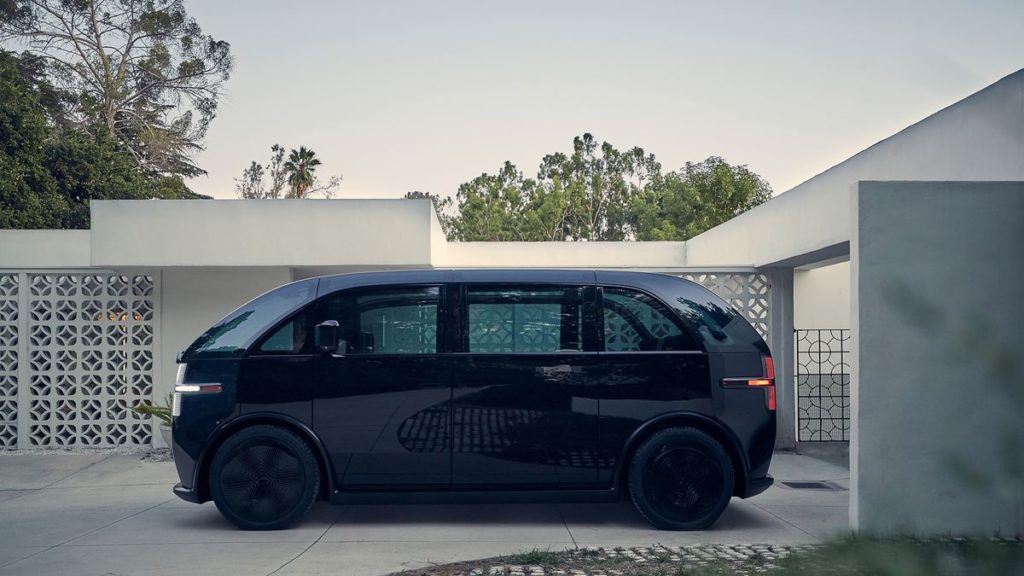 One of the biggest advantages of electric vehicles is that they can potentially have far more packaging flexibility than combustion-engine cars. Companies have been taking advantage of this, as you can see in Tesla’s twin-trunk designs and Volkswagen’s volume-maximizing reborn electric Microbus. A startup called Canoo is taking a similar approach as VW, with an EV that’s a clever study in the maximization of interior volume. You know, a van.

Though it’s not autonomous, though the company says they’re working on that, the room-on-wheels design is exactly what future autonomous vehicles should be (there may be a book out that says just that) and even in its current, human-driven form, the design looks incredibly flexible and usable.

The Canoo was designed by Richard Kim, the designer behind BMW’s very innovative i3 and the sleek i8, and while there are clear similarities to Kim’s earlier designs, the Canoo shows a much purer design, an unashamed, streamlined, heavily-windowed box on a skateboard, an envelope that surrounds a very versatile and appealing interior.

The front and rear profiles of the Canoo are just about identical; were it not for the position of the rear-view mirrors and colors of the lights, it would be hard to tell which end was front and which was the rear. It’s sort of like a very modernized VW Bus, or perhaps even an enlarged and updated Zündapp Janus.

The rear of the vehicle has a U-shaped bench seat, with what appears to be seat belts for three passengers. There’s also some flip-down jump seats behind the front seats as well, adding two more places to sit:

If there are seat belts provided for the side-mounted seats, you could have five on the rear bench, plus the two jump seats, plus the front seats, for a total of nine seats, which seems about right.

There are some cubbies under the rear seats and in the doors, but it looks like there are no strictly-designated cargo areas, though there is certainly room for plenty of cargo on the large, flat floor area.

It also appears that the rear bench can fold to make room for bulky cargo, like that dude’s asphalt-colored surfboard, and it looks like there are two little modules in the side panel there, one containing a clock and the other having what I think is a small planter?

It also appears that the front seats can rotate, Captian’s Chair-style, which is always a good thing for a van. There’s also plenty of windows in the roof as well, and the whole interior feels incredibly airy and open. It looks like it has lots of camping potential as well, and while I haven’t actually touched any of the interior materials, these pictures do make it look like they could be fairly hard-wearing and hopefully easily washable.

The Canoo uses conventional hinged doors instead of a more van-like sliding door, which is sort of a curious choice, but not necessarily a bad one. The only really glaring bad choice I can see here is in the driver’s controls, with a steering wheel that’s not a wheel at all, but a square frame:

Visibility looks great, sure, with that extra low window below the beltline, but does anyone actually like driving with a rectangle?

The center of the not-wheel has an airbag with a lot of text I’m pretty sure you don’t need to have so constant and prominent, while the instrumentation appears to be on the beltline band separating the upper and lower windshields.

There’s a large volume of space in front of the instrument panel that I suppose could be used for cargo, at the risk of blocking that lower window.

The fundamental design of the Canoo I think is great. It’s logical and practical yet feels sleek and futuristic as well. This is what Tesla’s Model X should have been, really, instead of a chubby SUV with fancy doors. This has the potential to be a genuine do-anything electric transport pod, and I mean that in a good way.

Technically, the 4,453-pound Canoo has a single rear-mounted motor making a claimed 300 horsepower, and with their floor-mounted 80 kWh battery pack, they claim a range of 250 miles, all decent numbers.

Canoo has some diagrams that suggest alternate bodies for their platform may be possible down the road, for sportier models, possibly with HVAC fans capable of blowing ties backward.

Now, Canoo’s model isn’t an ownership one, so if you want to buy one, you can’t. It’s a subscription model, much like what Lynk & Co is planning, where everything—insurance, registration, maintenance, even charging costs—is wrapped up in a monthly fee. It’s not clear if there will be minimums or not yet, but if there aren’t this could potentially even compete with rental cars.

The design looks impressive, but the real question is, of course, will it actually happen? Canoo was born as EVelozcity (and thankfully they’ve changed that idiotic name) and began with a lot of people who came from perpetual shitshow Faraday Future, amid a lot of fighting and legal battles.

Things seem to have settled down, and Canoo allegedly has decent funding, but this is a hard business to get going in, so I’m not sure a breath-holding policy makes sense here. Like all startups, we can only dream.

Still, it’s a clever vehicle, and could be interesting competition to Volkswagen’s upcoming ID Buzz. A lot will depend on how much those monthly subscriptions are, and how well they can be supported.

I guess we’ll just have to see.

Are Electric Cars The Future ?