Montreal startup Taiga Motors has spent the last few years tackling the tricky task of electrifying snowmobiles, but it’s now turning its attention to making cleaner and quieter personal watercraft. The company unveiled a pricey new Jet Ski-style watercraft called Orca at an event in Toronto Tuesday night that can last for up to two hours on a full charge.

The Orca has a top speed of 65 miles per hour, and has 134kW of power (about 180 horsepower) on offer, which sounds like it will make for a fun ride. The 23kWh battery can be charged on standard or level 2 (240V) outlets, or more quickly with a DC fast charger (from 0 to 80 percent in 20 minutes), provided owners can find one of those near enough to the water (or with enough space to fit a truck and trailer).

Taiga Motors says it’s gone to great lengths to build a battery back that not only can withstand the punishment of riding at up to 65 miles per hour on open water, but one that won’t lose its overall capacity when stowed away for the winter. It also won’t require owners to suffer through the time-consuming “winterization” process, since there are fewer moving parts. All Orcas will come with a five-year, 20,000 kilometer (roughly 12,427 miles) warranty. 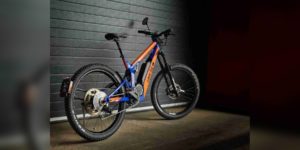 LMX has a new electric bicycle to offer, but this isn’t a typical e-bike. Not only is the LMX 64H a light off-road electric motorcycle,

Electric Snowmobile by Taiga Motors Taiga Motors is one of the rare companies working to bring to market an all-electric snowmobile, which is actually a