T3DP, a California-based startup developing 3D printing technology, has applied its patented volumetric 3D printing technique to build perovskite-based solar panels, which can double the amount of energy harnessed from the sun.

Building on a Stanford University study titled, Scaffold-reinforced perovskite compound solar cells, this volumetric 3D printing method cures objects in a single step, rather than layer by layer. Daniel Clark, the principle inventor of the technology and founder of T3DP, tells 3D Printing Industry, “We have literature from my patent from 2014 for 3D printed solar energy that pre-dates the Stanford study, where we emulate the macro of a fly’s eye. The Stanford article was very useful for us to expand our research to new horizons.”

The future of solar panels?

Perovskites are calcium titanium oxide crystals with superconductive properties. In recent years, this material has generated a lot of interest and is considered by some to be the future of solar cells. Already researchers from various institutions are exploring the potential of perovskites to give us high energy solar cells. However, due to the fragility of the material, the manufacturability of perovskites has proved difficult.

Clark explains, “Perovskite is very scalable now that the manufacturing bottleneck has been solved. Perovskite’s consistency is somewhat similar to table salt, so it needs the scaffold sub-cells to hold it in place for longevity.”

Eye of the fly

According to Clark, the 3D printed solar panel made by T3DP is inspired by a fly. “We copper plated the hexagon scaffold that is an exact replica of a macro of a fly’s eye so that the electricity can run directly through the scaffold to create a truly decentralized solar design that routes electricity in parallel,” he said.

This is in contrast to the centralized solar panels currently employed in industry, which are wired in series parallel circuit similar to a string of Christmas lights, “when one bulb goes out the whole of light stops working,” comments Clark.

“T3DP does not have that problem as each sub-cell operates decentralized as its own entity.” 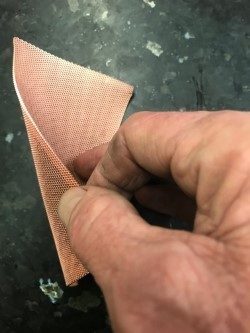 Talking about future production goals at T3DP, Clark says, “We are currently setting parameters to have Sono-Tek, and our partner, Vish Gautham, from Microsys International (S) Pte Ltd., to turn the copper scaffold into a mini decentralized solar panel. Vish has a factory overseas that is able to mass produce these solar CIGS (Copper Indium Gallium Selenide) solar triangles.”

“The goal is to place the 3D printed hexagon scaffold design in tandem with our CIGS solar triangles. Upon success we could see a 50% solar panel power efficiency.”

Clark elaborated, “Sunpower is the next in line at 22.2% solar panel efficiency. The solar triangles we used were rated at 20% power efficiency, however, when we place the solar cells in the 3D arrangement, we were able to put twice as much solar material in the same area, thus achieving a 36% solar panel power efficiency.”

“We should have a 50% solar panel power efficiency ready for mass production by 2020.” 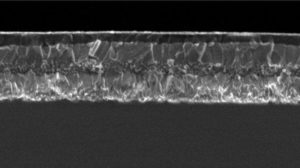