EPFL scientists achieve the highest yet reproducibility for perovskite solar cells combined with a boundary-pushing 21.1% efficiency at normal operating conditions.

Perovskite solar cells hold much promise for cost-effective solar energy. However, heat stability is an issue. This has been addressed by mixing perovskite materials with inorganic cesium to improve the solar cell’s thermal and structural stability. Using this approach, EPFL scientists have now developed a cesium-containing perovskite solar cell that has achieved efficiency of 21.1%, as well as record-level reproducibility. The work is published in Energy and Environmental Science.

The research was carried out by Michael Grätzel’s lab at EPFL, who already achieved 20.2% efficiency earlier in 2016. This time, they set out to address the problem of thermal stability, which can significantly limit the efficiency of a solar cell in the long term.

Because of their enormous potential for the future of photovoltaics, perovskite solar cells are under immense research, and thermal stability has been addressed with the addition of cesium. But this poses two problems: First, the resulting inorganic cesium lead trihalide perovskite (CsPbBr3) does not offer an ideal band gap for photovoltaics. This means that it requires too much energy to excite bound electrons enough to free them so that they can flow as electrical current.

The second problem of using cesium is that, at room temperature, it forms crystals that do not respond to light. In fact, the cesium mixture is only stable at temperatures above 300oC.

Consequently, the pure perovskite compounds fall prey to thermal or structural instabilities. However, the perovskite phase of CsPbI3 offers a more suitable band gap, and as such is being thoroughly investigated. One approach, called the “antisolvent method”, uses mixed cations and halides.

In the EPFL study, led by postdoc Michael Saliba, the researchers used for the first time a mixture of a triple cation (Cs/MA/FA). The new films are more thermally stable and less affected by fluctuating surrounding variables such as temperature, solvent vapors or the heating protocol used for the device. But more importantly, they show stabilized power-conversion efficiencies of 21.1% and outputs at 18% under operational conditions, even after 250 hours.

“This is an absolute breakthrough,” says Michael Saliba. “These properties are crucial for commercializing perovskite photovoltaics, especially since reproducibility and stability are the main requirements for cost-effective large-scale manufacturing of perovskite solar cells.” 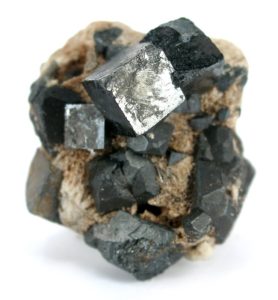